If there is a breed who has earned the right to be a snob, it's this one.  After all, they are literally named after a King!  And yet, this breed is anything but snobby.  They have proven to be extraordinary companions, highly adaptable to their surroundings and great with children and other household pets. Welcome to the world of the adorable Cavalier King Charles Spaniel! 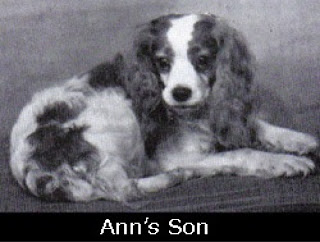 ORIGIN:  You've seen them in various paintings with (of course) royalty.  Shakespeare even gave them a roll in "The Taming of the Shrew".  The Cavalier King Charles Spaniel dates back to roughly the 16th century.  King Charles I,  and his son King Charles II, were huge fans of this little dog.  When Charles I was beheaded he had one of them hidden under his robe to offer him comfort (the dog was not harmed in the beheading!)  King Charles  II had as many as a dozen in his bedchambers. ("Fan"  may be a bit of an understatement!)  This is how "King Charles" fits into their name.  They were used as a hunting dog for small birds, and were even fast enough to keep up with a trotting horse. However most sought them out to be used as a companion dog; perfect to fit on one's lap! The breed originally descended from the "King Charles Spaniel", which was then combined with other toy spaniels (especially the Toy Trawler Spaniel, a breed now extinct).  The original look of the CKCS (Cavalier King Charles Spaniel), was that of a longer nose and a flatter skull.  But as the Pug gained in popularity in England, these early examples of the breed were bred with Pugs to create a shorter pushed up snout and larger eyes with lower set ears.  The obsession of royalty with small companion dogs is what prompted breeding the CKCS with the pug to create a dog that looked more like a human infant (smaller nose, larger eyes, lower set ears).  There is an actual term used for this human-like resemblance in animals ; Neoteny.  Unfortunately, like so many other things in life, this new look created unintended consequences such as in increase in health problems with the CKCS (we will cover that below). After decades of popularity the CKCS began to die off due to the hardship created by WWII .Interestingly enough it was an American, Roswell Eldridge from New York, that saved the breed from extinction by seeking out CKCSs from the original stock (those with longer noses, smaller eyes, and ears set higher on the head) to rebuild the breed. Eldridge single handily saved the breed and we are certainly glad he did! 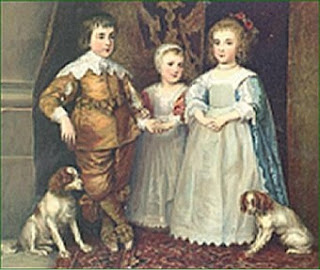 INTERESTING INFO:  The Cavalier King Charles Spaniel is actually a different breed from it's cousin the King Charles Spaniel (also called the English Toy Spaniel).   The CKCS is the larger version of the two, outweighing the King Charles by a whopping five pounds!  The CKCS is the largest of the toy breeds. They are available in four different color varieties:  Blenheim (red and white), Tricolor (black/white/tan), Black and Tan, and Ruby.  As stated above, they could be used to hunt small birds and were bred to run fast enough to keep up with a trotting horse. But their preferred use was as a lap and food warmer for mostly royalty, and they were even used to attract the fleas off of their royal human companions onto themselves!  So one could deem them "Royal Flea Bags!"  A bit of an oxymoron to us! 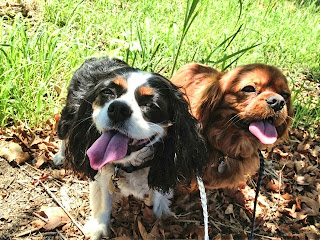 PERSONAL OBSERVATION/ASSESSMENT:  In doing our research, it seemed quite clear, in five out of six references,  that when the breed was "restocked" (1920-present) the stock was to be of the original look,  to bring back the longer nose, smaller eyes and different ear set.  However, look at any of these adorable pups and NONE we have seen have any of the original facial features.  They all seem to retain that Neotonized look created when the original breed was bred with the pug to produce that "cute little pug nose", large eyes and lowered ears. The correct breeding would be to go back to the original look rather than the pug look.  Why?  Because with that short nose and larger eyes came a host of health problems.  Only one source we referenced  mentioned that most breeders did not adapt the original breeding principals because people favored the pug-like features.  What a shame that "aesthetics" have overrun health preservation in this (and so many other) breeds.  We love this breed and have thoroughly enjoyed each and every one we have had in our pack.  They are so affectionate and literally just want to be loved and entertained one on one.  Because of this, they aren't the type of breed you will see running with the pack in pictures, but rather hanging with the smaller dogs and the humans awaiting a hug, some petting and a vacant lap!

HEALTH ISSUES:  This is the down side to this wonderful breed.  They are prone to many health problems.  Eye issues such as cataracts, retinal dysplasia and dry eyes are quite common, as are hearing problems  They are also very prone to hip dysplasia, luxating patella and syringomelia (which can be extremely painful and even result in paralysis).  But the most common disorder of the CKCS is mitral valve disease.  Nearly all Cavaliers suffer from this disease, which causes a heart murmur and can lead to heart failure. It's simply far too common.  And if a Cavalier is diagnosed with this at an early age, they can have a much shorter life than the expected lifespan of 9-14 years. 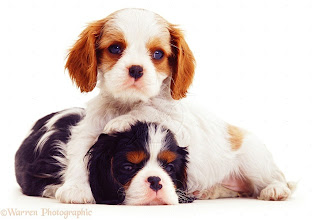 IS THIS BREED FOR YOU:  Don't get scared away by the health issues!  The good news is that there are responsible breeders who have worked to minimize the mitral valve disease.  As with any breed, if you choose to go with a breeder, do your research!! You can find a much healthier strain of any breed in which  responsible breeders have worked hard to keep their breeds as healthy as humanly possible (that is why we need professional breeders who will do it right).  The temperament of this breed makes them easy to adapt to apartment living.  They do need exercise, and will act out if not properly exercised, but they don't need a five mile hike.  They do very well with moderate daily exercise and lots of one on one time with their human companions.  If there is a breed "addicted to love", it's this one!! After all "Love" is what they were truly bred for.  They are not fans of hot weather.  They come from England (not a whole lot of heat waves there), and their main purpose was to warm laps in palaces.  So they definitely prefer a cooler environment. ( Not the breed to take on a hike through the Sahara!)  They are wonderful with every human, from infants to seniors, as long as they are properly socialized.  Because they do have the "bird dog" spaniel in them, they will chase birds and even have the potential to chase cars.  Definitely not a breed to walk off lead (just for the record, we do not recommend ANY dog be walked off lead except for in a safe off lead environment).  If you are looking for the perfect smaller companion dog, it's hard to beat the Cavalier King Charles Spaniel.  Sharing a slice of your life with this little partner will create memories you will cherish forever.