MEET THE BREED: THE GREAT DANE 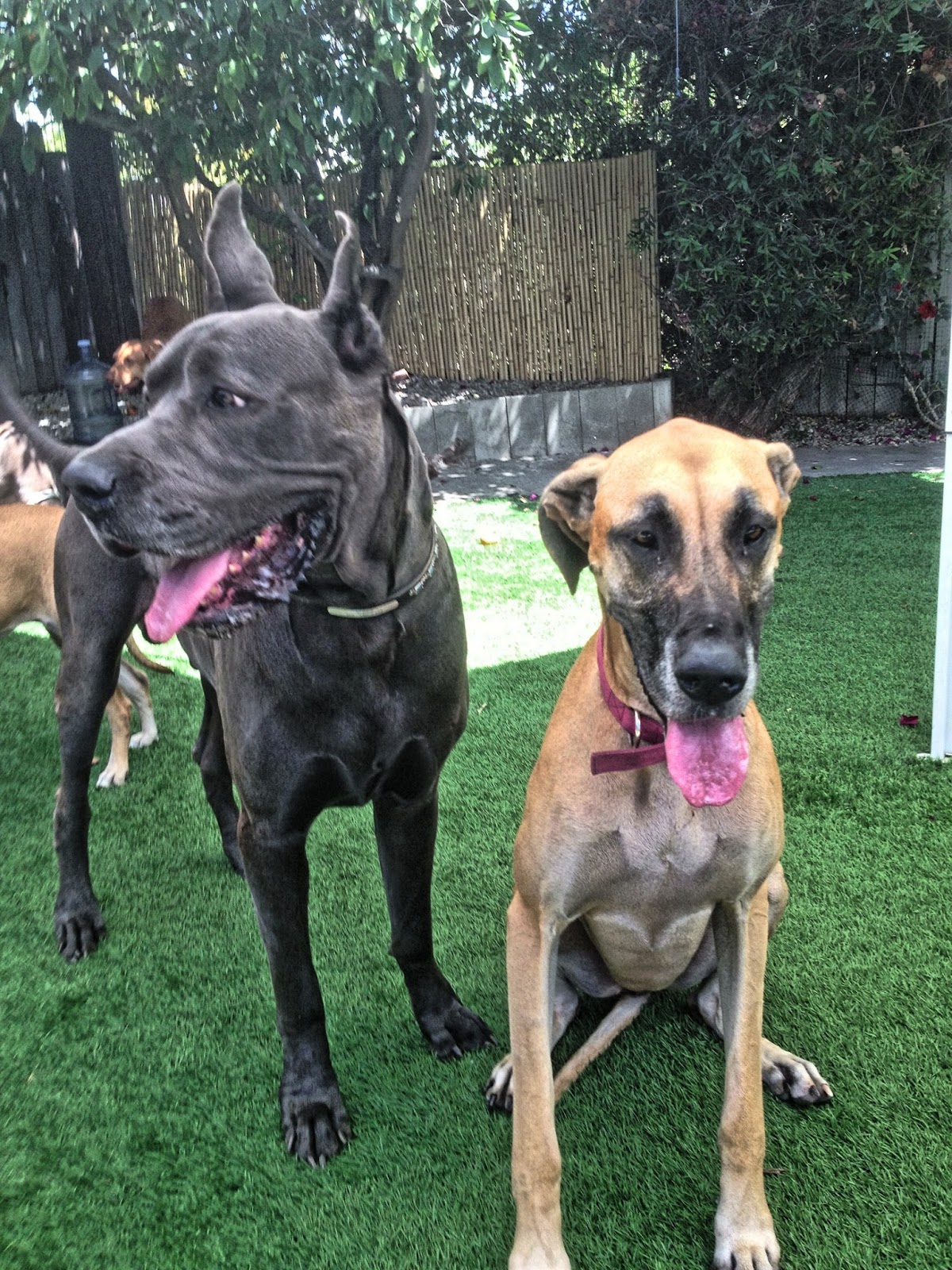 The Great Dane. It is impossible not to turn your head and watch this immense beauty pass by, be you a dog lover or not.  The sheer size (100-200 pounds) and power of the Great Dane makes it impossible not to be stared at. (Especially if you see one riding in a Mini Cooper with their head sticking out the sunroof, ears flapping in the wind, as we were lucky enough to see once and laugh hysterically at!)  The Great Dane has earned themselves the right to be called one of the most beloved breeds in America, thanks to a comic strip called Marmaduke, space age Jetson's dog Astro,  of course, Scooby Doo.  All three depict this breed as a fun-loving, goofy giant.  But just how did this breed evolve? Was this giant bred to just be a goof ball (which undoubtedly they are), or is there a little something more to this majestic animal than meets the eye? 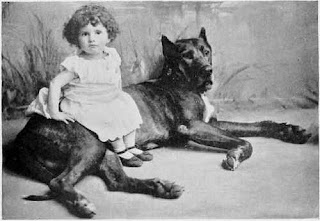 HISTORY: Not that this breed is particularly ancient or anything- BUT dogs "resembling" the Great Dane have been seen on Egyptian monuments dating back to 3,000 BC!  Similar looking dogs have also been depicted on rune stones in Scandinavia, on ancient coins in Denmark, on Greek money dating back to 36 BC and the University of Copenhagen Zoological  Museum has at least seven skeletons of very large hunting dogs dating from 5th Century BC through to the year 1000 AD!  And if that's not enough to get your head spinning, giant dogs sounding an awful lot like the Dane were depicted in Chinese literature dating back to 1121 BC.  Okay enough history, now how they became the breed we see today.

ORIGIN:  In 407 AD The Asiatic people (called the "Alans") invaded German Gaul, part of Italy and Spain, bringing with them powerful mastiff-like dogs.  Theses dogs were used to hunt and physically bring down bear and wild boar. They were believed to have been mostly a cross of Wolfhounds (particularly the Irish Wolfhound) and the old English Mastiffs.  The Alans later added the Greyhound to this breed, creating the Great Dane we know of today. We think it is important to note the Alans were a nomad tribe.  Nomads had no home base to speak of,  constantly traveling as a means of survival.  The Alans were warriors that relied on their Danes to hunt and guard their tribes.  Because they were not in castles, but the wilderness, there became much more of an "inter-dependence" between man and canine. Nomad tribes are notorious for developing a closer relationship with their dogs than many other people. It is our theory that the amount of time Danes spent around human species so early on in their development, combined with a shared existence with one another in a very primal and dangerous environment, could have imprinted more "human type personality-traits" on these nomadic-companion dogs. Perhaps that is why we see more of these traits (such as an increased sense of humor and higher sensitivity levels we see in todays Great Danes)  than is displayed in, say, herding breeds like Border Collies, who have historically that spent much time as solo working herders independent of their companion/human  shepherds. 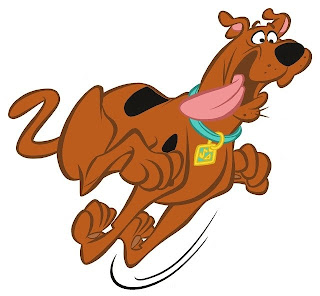 INTERESTING INFO:  The Great Dane became widely spread throughout Europe between the 16th-18th century and countries such as Denmark, England and Germany all like to take credit for the Dane's increased popularity and refined breeding.  Not only were they used in these countries as powerful hunters, but also as guard dogs. Unlike other canine guardians such as their breed-stock Mastiffs,  Danes were not kept outside to guard the royal grounds  but rather in their lord's bed chambers to guard their companions  from assassins (we believe this also contributed to human personality being a stronger influence in the Dane).  What we also find incredibly interesting is that the  three breeds used to create the original Great Danes were hunters possessing powerful prey drives, yet todays Great Danes possess not only a goofy personality, but they can also be around other animals without displaying hunting traits that could cause serious harm.  For example, Irish Wolfhounds are the largest  breed  in the world, and the most powerful of the sighthounds.  Their extraordinary eyesight makes it possible to spot prey from long distances, lock in on their movement and run fast to  intercept the prey (original prey being Wolves). The English Mastiff is not only a powerful giant, but a fearless guardian and war dog.  The Greyhound is an extraordinary sighthound and the second fastest animal in the world (able to run 39 miles per hour).   When you put those three breeds together, combining speed, hunting ability, superb eyesight and fearless guarding ability, you have todays Great Dane.  And yet, this breed, which has been called  the "comedians of the canine world", can easily be around screaming children (running here there and everywhere), as well as small animals!  It's information like this that continues to impress and blow our minds,  and strengthens our belief on how much our human personality has influenced the psychological development of this extraordinary breed. 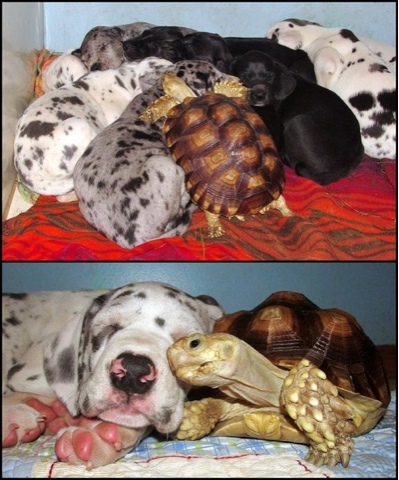 PERSONAL OBSERVATION   Being at a dog park for a decade afforded us an extraordinary  opportunity to observe numerous breeds in an uncontrolled, quite primal, environment.  Observing the Dane there, we witnessed the prey drive the majority of them seem to possess.  Please note we are not speaking of witnessing attacks by Danes! What we did see was an innate and immense amount of speed and power  used to chase other dogs. When combined with their size, these instinctual traits of speed/power had a tendency to put other dogs into a  mode of total submission due to fear called "shut down".  These poor dogs just had no idea on how to react to such huge, fast dogs chasing them! And the Danes who DID the chasing seemed to be confused as to how "fun" (in their eyes), could cause other dogs to be so afraid.   The result was confusion among both "chaser" and "chasee". That is why the majority of Danes have never worked out with our pack. What is most important to understand is that it's not the breed's fault and it's not the owners fault (as long as the breed has had proper socialization).  It is simply the nature of the breed.  Only the exceptions of Bison and Estella have ever worked out with our pack.  If we traced these two's lineage, combined with their excellent early socialization, we would probably have our answer as to why they are the exceptions.

HEALTH PROBLEMS:  The wonderful  Great Dane is subject to health problems that comes along with the territory of being a giant breed.  Hip dysplasia, heart disease and bloat are common,  as are mast cell tumors.  Most unfortunately what also goes along with being a giant breed is a shorter lifespan.  The average is approximately eight years, but many do live up to 12.  (We believe this has a lot to do with the wonderful goofiness which seems to prevent them from taking life too seriously. This can   diminish stress considerably in the breed.) It is also important that owners of the breed understand the species they have committed themselves too, and dedicate themselves to the proper upkeep of the breed.

IS THIS THE RIGHT BREED FOR YOU?:  Many people find themselves scared off of owning a Great Dane due to their size and strength. And it is true they are enormous and strong.  But if you frequent the gym and are ready for a commitment to this wonderful goofball, it could easily be one of the most rewarding and entertaining experiences of a lifetime!  They can live in an apartment as  long as they are taken out for long walks (running/jogging them is not necessary nor recommended until they have physically developed).  They do love a yard though!  And, as they are an excellent guard dog, they thrive on having that open space to strut their stuff.  But what they clearly thrive on the most is close human contact. This is NOT a breed to be kept alone and isolated outside.

We hope you have enjoyed this blog and we would love to hear from you regarding input (or really anything you feel like contributing!)