MEET THE BREED: THE ROUGH COLLIE (AKA LASSIE) 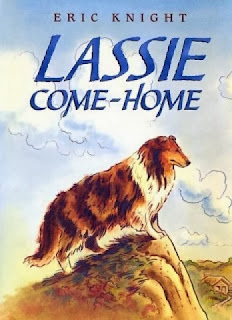 No other canine character/actor has had a stronger impact on the American dog culture than Lassie.  She represented the quintessential relationship between a boy and his dog while at the same time serving as a symbolic representation of loyalty, honesty and true companionship. She was as important and emblematic to American culture as apple pie, Babe Ruth and the 57 Chevy.  Everyone wanted their own Lassie; that dog who could rescue Timmy from the well, find her way home from 2,000 miles away, battered and bruised, and fall into the arms of her loving family.  But who is this stunning Lass really?  Does her breed stand up to the mythology?  Why don't you see more of them nowadays?

HISTORY:  The Lassie (or Rough) Collie we know of today was not the original look of the breed.  The Rough Collie originated in the 1800's,  a product of crossing a larger type of collie used and bred for herding from Scotland, with a smaller sheepdog from Wales.  The Scottish "collie-type" was large, strong, quite aggressive and used to herd highland sheep.  The "collie-type" from Wales was small and nimble, much more domesticated and friendly and used for herding goats.  This cross of the Scottish and Welsh Collies was later bred with the Borzoi (the Russian Wolfhound) to produce that beautiful "noble head" Rough Collie we see today, with their signature long, pronounced nose.  (The Borzoi addition to the breed was honestly used to improve the look of the breed because they were quite popular with royalty, including Queen Victoria).

INTERESTING INFO:   Where to start. This breed is so incredibly interesting, what we discovered quite frankly blew our minds!  But here goes; The collie is arguably the most domesticated of all herding breeds.  They were not only used to herd and guard livestock, but were also excellent family dogs with an affinity towards children,  even being used as babysitters.  Can you imagine an animal with the tenacity to herd and guard livestock also being so gentle that their owners trusted the dog in the home alone with children?!  Impressive to say the least. Speaking of impressive, the earlier larger version of this breed could travel up to 100 miles A DAY on their four legs alone! (Is this starting to sound like any familiar "fictional" canine character to you?)  If that isn't impressive enough the Collie has an UNCANNY sense of direction.  One could intelligently argue that if this dog were lost or stolen and ended up thousands of miles away from home, they could indeed find their way back. What we are left with then, is an animal with an incredible devotion and loyalty to family who also is able to travel 100 miles a day and has an uncanny sense of direction.. In other words, the Mythology of Lassie is true indeed. Eric Knight, the Author of "Lassie Come Home", the 1940 book that started it all, knew a little something about this breed. We assumed research on this author would reveal a man who thought the breed beautiful, and that simple admiration would be what inspired him to create Lassie.  But it turns out this man could "walk the walk" as he was a professional Collie breeder.  Knight's work on a fictional Collie was, in fact, preceded by the writings of Albert Payson Terhune,  who introduced the world to the Collie via a series of short stories called "Lad Stories",  based upon his own dog named Lad.  He eventually turned the stories into the 1919 novel "Lad: A Dog".  Terhune not only raised Collies but owned the most famous and prestigious Collie breeding facility in America, the Sunnybank Kennels, whose lines still exist in today's Rough Collies. Both Terhune and Knight's firsthand experience with this extraordinary breed gave them the true insight and knowledge to create the Lassie and Lad characters. Dog's whose exploits, it turns out, are not so far-fetched after all.

IMPORTANT BREED INFORMATION:  Other than herding and flock guardian, the Collie can also be trained for search and rescue, therapy dogs, agility, guide dogs for the blind and as a watchdog.  It is important to note that they are big barkers. This would probably discourage people from entering  your home. But if they persisted, the Collie would either do little or perhaps want to be friends. (Especially if the person is a child!)  The Collie is available in the long-haired "Rough" version or the short-haired "Smooth" version.  In our research we could find no personality differences.  Other than the coat, they are considered variations of the same breed through the AKC and UKC.

HEALTH:  They have a lifespan of 14-16 years, which is quite impressive and optimistic considering the size of this breed (between 50-75 pounds).  They are not prone to cancer like so many other breeds are, but they do have certain ailments.  CEA (Collie eye anomaly) is common.  It is caused by improper development of the eye and can lead to blindness. Canine cyclic neutropenia is a cyclic blood disorder that is fatal to puppies.  DNA testing can conclude whether a collie pup is infected.  Hip dysplasia is quite common as well. It is important to note Rough Collies may carry a mutant MdrI gene that results in a sensitivity to Invermectin and related drugs.  Invermectin is common in heartworm prevention medication.  Giving this drug to a collie with the mutant gene can result in neurological impairment and even death.  Collies are also prone to epilepsy, bloat, allergies and hypothyroidism.

PERSONAL OBSERVATION:  We have had the pleasure of working with four Rough Collies during the last 14 years.  Never have we seen any aggression toward people or any animal.  We also agree with the references used for this blog which indicate that they are a herding breed so highly domesticated as to result in a dog much more outgoing and friendly dog than many other herding breeds.  Our pack loves Collies and would always welcomed even those who were not part of their pack to join in the play while we were at the dog park.  Our pack showed reservations over many dogs and certain breeds, but the Collie was never one of them. (and we think our pack has an outstanding judge of character!)  They definitely do bark a lot.  But interestingly enough, the barks from this breed never bothered us, as the resonance of their voice doesn't seem as piercing as many other breeds (like our Goldens!). 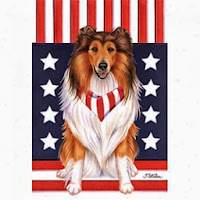 IS THIS BREED RIGHT FOR YOU?  If we didn't have three Goldens, we'd be looking into getting a Collie.  It seems when Lassie went off the air the passion for the breed diminished, which is a shame.  We also believe many are scared off by the grooming necessary to keep that beautiful coat in tact.  They definitely require a strong commitment to regular brushing.  But if this is the only reason discouraging you, think about the Smooth Collie, which has a short coat and requires much less grooming time.  If you live in an apartment, the barking could be an issue.  But if temperment is your main concern, as far as we are concerned, the Rough Collie is a slam dunk, a home run, and is still as All American as apple pie, baseball and hot dogs!

We hope you have enjoyed this blog and found it informative and interesting.  We would love  to hear your comments and share any stories pertaining to sharing a part of your life with this amazing breed!