Disgusting and annoying things our dogs do... is there a reason or simply a plot to drive us insane?

You come home after a long day to find your favorite pair of shoes torn to shreds. Your beloved dog "Spot" greets you by peeing everywhere. You've just had Spot bathed. He smells the best he has in God knows how long.You reward him by taking him to the park and he rolls in a mud puddle or worse.... UGH!!! You always thought Spot loved you but now you have serious doubts. Why would he do things that drive you nuts? Is there actually a justifiable reason for these annoying behaviors???!! The good news for Spot is YES. Here's a glimpse at some of the things dogs do that annoy, anger and disgust us and why..... 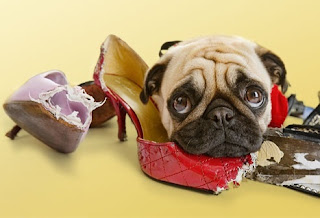 CHEWING UP SHOES: Dogs chew for a variety of reasons. Boredom and anxiety are a couple of them. But when it's your shoes, specifically the ones you wear more than any other, it is simply a term of endearment. Your shoes smell like you, your dog wants to be close to you and your shoes are the closest thing to being with you. Also, rubber soles on sneakers resemble material for dog toys and leather reminds them of rawhide. Bottom line, keep your shoes in your closet, keep the closet door shut and make sure Spot has plenty of fun, safe toys to play with and chew on.

PEEING TO GREET YOU: If your dog greets you by crouching low and peeing, it is a sign of appeasement. Confident, more dominant dogs will not do this, but if a pup is more submissive, they do this as an ice breaker. This behavior was developed to appease the more dominant parent and pups from the litter. Some also do this out of excitement. When you come home, if you have a submissive and/or excited peeing pup, try ignoring them for a few minutes until they are settled in with you being home. This may help. The dog will usually grow out of this as they mature. 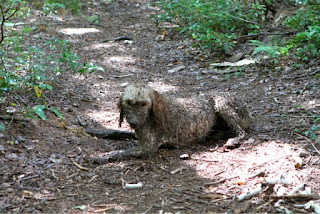 ROLLING IN MUD OR WORSE (POOP, DEAD ANIMAL REMAINS): Dogs retain many of their primal instincts stemming from surviving in the wilderness. When a dog rolls in mud, poop or animal remains, they are simply using this as a form of camouflage to mask their scent and therefore decrease their chances of being hunted (and eaten) by wild animals who would consider them prey. But Spot lives in a condo.... how could that possibly apply to him??? The majority of things our dogs do stem from their primal instincts for survival. So it doesn't matter whether you live in a tent in the middle of the jungle or a condo in West Hollywood, dogs instinctively react the same. Especially after a bath. Can you imagine how Spot would stand out having all his natural scents removed and replaced by perfume and rose petals? Talk about a sitting duck!!! At least go with unscented shampoo. That may reduce the risk of Spot adding his own "poo perfume".

EATING POOP OR MUD (OR WORSE): Some dogs are just attracted to the smell of poop and think it tastes just fine as a snack. But it is usually a sign of a deficiency in the pup's diet. If so, they will seek out poop, especially cat or wild animal poop, because those animal's diets are much higher in protein, which satisfies a dog's carnivorous nutritional needs. Dogs that eat mud are actually seeking out the clay in mud which contains trace minerals and adds substantial benefit to their diet if it is not properly balanced. Some dogs will eat things that contain no nutritional value such as rocks. This again usually stems from either diet deficiency or extreme boredom. Eating poop and mud is harmful only if the animal's poop or the mud contains a parasite such as guardia or whipworm, but eating things such as rocks can be potentially fatal as it can cause a blockage. 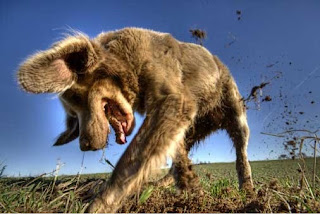 DIGGING HOLES: Most dogs like to dig and some LOVE to dig. Thousands of years before they became domesticated, dogs dug for food (insects and ground burrowing animals), water and a comfy place to lie down. In a nice deep hole, dogs were more easily hidden from predators, and a hole in the ground provided excellent insulation from bitter, cold conditions or heat. Dogs will also dig out of boredom. Some of their primal instincts are much more easily triggered when they are not being exercised and/or entertained (played with, shown affection, etc.)

The list of interesting and frustrating things our dogs do is a very long one. We will periodically return to this subject in future blogs to cover more topics but do not want to overwhelm or bore you with too much at one time! As always, we would love your stories on what your pup has done to "get your attention" and/or make your hair stand on end and will be happy to address these in future blogs.