This Week's Meet The Breed: Vizsla

For anyone who has shared time with this incredible breed, there is the unmistakable regal look the Vizsla will give you and there is good reason for this.  This ancient breed earned their regality by being the only hunting dog of its time to also be a companion dog brought into the home and trusted to be around children. 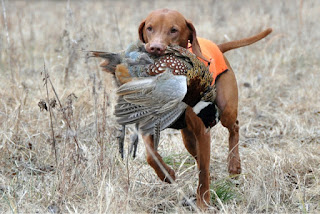 ORIGIN-  The Vizsla is a Hungarian hunting dog.  In fact, the word Vizsla is Hungarian for "Pointer".  This ancient breed dates back to the 10th century. They were the favorite hunting dogs of the Magyar Tribe. Primitive stone etchings over a thousand years old show the Magyar hunter with his falcon and his Vizsla.  Warlords and barons held this breed in high esteem and enjoyed both their excellent hunting skills for "upland fowl" and small prey such as rabbits, and their ability as a gentle, loving companion that could be trusted around their children. The Vizsla was used in the establishment of other breeds such as the Weimaraner and German Shorthair Pointer.  Interestingly enough, the Vizsla almost became extinct in the late 1800's, as they were overrun by the English Pointer and the German Shorthair Pointer, the very breed they helped create!  Lucky for the Vizsla, they were so beloved and respected, the Hungarian people worked hard to protect the only 12 remaining Vizslas in the world, and brought the breed back. Vizla's were then shipped to other countries such as Romania, Austria, Slovakia and Serbia to help increase the stock.  From there Vizslas started arriving in the United States at the end of World  War II to gain AKC recognition (which they did in 1960). 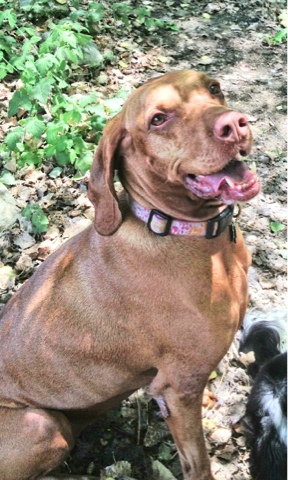 INTERESTING VIZSLA INFO - This breed is not suitable for being kept outdoors as they have no undercoat, which makes them intolerant to severe weather conditions.  They are self-cleaning and rarely, if ever, require bathing!  The tail of the Vizsla, when used as a working hunting dog, is docked longer than other breeds.  This is because the Vizsla uses it's tail to cut through rough scrub and undergrowth while seeking out fowl and small prey as it wags it vigorously back and forth.   Please note;  We do not condone the docking of tails except for the health and well-being of the breed.  Example:  If a Vizsla is a working  hunting dog and does not have the tail docked, it will be severely injured and/or ripped by the brush they are hunting in.

PERSONAL OBSERVATION - We have never encountered a Vizsla that was not a sweet, gentle loveaholic! Even though every reference we have checked mentions what a high-strung breed this can be, requiring a lot of exercise, the Vizslas we have had in our pack have not been high strung or overly energetic. We have found them to be large lap dogs (and by lap we mean sitting in your lap and lapping your face)!

HEALTH ISSUES - Because they lack an undercoat, they are not insulated from the microscopic pollen in the air and are very susceptible to environmental allergies.  They are also prone to food allergies as well as  Epilepsy, Cancer, Sebaceous adenitis,  Hypothyroidism and Dwarfism. 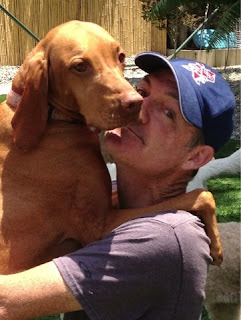 IS THIS A GOOD BREED FOR YOU? - They're wonderful with all people including children and are even fine with cats if they are raised with them.  Their hunting instincts will kick in with small prey such as squirrels, hamsters, guinea pigs and rabbits, so if you have these little critters hanging around and wish to keep them around,  shy away from the Vizsla.  Since every reference mentions they need a lot of exercise you must be willing to put in the hikes, walks and/or jogs with the Vizsla because some can be prone to chewing if not stimulated enough mentally and physically.  We also would not recommend this breed for those living in extreme heat climates as we have definitely noticed how hypersensitive they are to hot conditions. 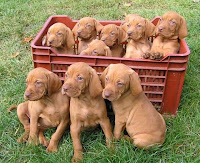 We hope you have enjoyed this blog on the Vizsla.  As always, we welcome your comments and stories  concerning this wonderful breed!