NOISES THAT SCARE DOGS AND WHAT YOU CAN DO TO HELP: JULY 4TH BLOG

In light of the fact July 4 is Thursday, we thought it appropriate and necessary to have the subject of this weeks blog be about noises that frighten our dogs.  July 4 is Animal Control's busiest day of the year,  and it is heartbreaking to see all the "missing dog" signs posted July 5. This can easily be prevented. So this weeks post covers how certain noises affect dogs and what you can do to help them.

The most common noises that scare dogs are as follows: 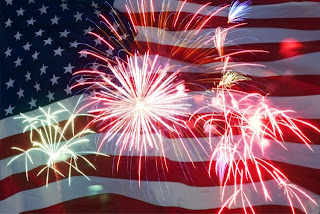 Why do these types of noises scare dogs?

The above noises to us humans can be startling, but would rarely evoke the fear response seen in many canines.  There are two reasons to explain their fear of these noises: the first is that some of these noises sounds like the loud growl or bark of a very large animal their ancesters would have heard in the wild.  The other reason for their reaction is a learned response.  The dog may have come to associate the noise from either a bad experience from their past, or a behavior a dog in a multi dog household learns from the reaction from another dog in the house.  For example; a dog is left outside in a thunderstorm and there is no way for him/her to escape the sound of the thunder.  That could easily carry through the rest of their life,  hearing the sound of thunder causes them to reliving that feeling of fear with no way to escape it, even though now they may be inside completely safe.  An example of this type of learned fear response is something our dog Bailey picked up from our other dog Taki. Bailey was here living with us before Taki, and we loved a nice fire in the fireplace on a cold night.  Bailey would always lie close to the fireplace and enjoy the ambience with us.  When we rescued Taki we saw she was afraid of the fire and would go hide in the bedroom.  Bailey saw her response, and soon began to hide with her. The crackling of the fire frightened Taki, and her response was so impressionable on Bailey that she started having the same response even though she didn't used to be afraid of the fire.

How Dogs React to sounds that frighten them: 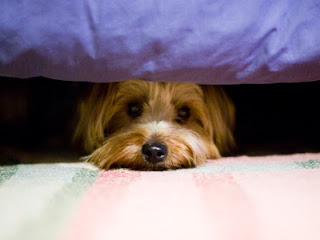 Like humans, dogs have a "fight or flight" response to things they perceive as threatening, whether it be an aggressive dog charging at them or the loud, threatening sound of fireworks.  Our Malamute Buddy hated the sound of fireworks but because he was a pack leader, he would run outside (in our fenced backyard while we were home) and bark at them, letting the inanimate perpetrator know he would "fight"  if this sound entered his territory. The other more common response of a dog is that of a "flight" response: he or she will get as far away from the sound as soon as possible, retreating to a place where they feel safe.  All dogs need a "safe" place within their home. To some, it resembles a small den such as a bathroom, shower, bathtub, closet or under the bed.  Other dogs are more comfmortable on their favorite sleeping spot such as a dog bed, couch or actual bed. So it is imperative that all dogs have a place within their home where they feel safe.  Most dogs feel safer in small, even cramped spaces and many, when frightened, will actually get themselves stuck under a large object because the confinement makes them feel safer.  The reason for so many "missing dog" signs after July 4 is an extreme flight reaction from a dog to run aimlessly and frantically as far away from the sound of fireworks as fast as possible.  Dogs will dig their way out of an enclosed yard or jump a fence if necessary.  They will even jump out of an open window whether the window is five feet off the ground of fifty feet.  A tragedy indeed.

What You can do to help:

The above information is sad and disturbing but the good news is there is plenty you can do to help your dog.

1.  If the frightening sound can be avoided, the simplest solution is to shield your dog from being exposed to the sound.

2.  If the sound cannot be avoided, make sure your dog has a safe place within the home to hide.

3.  Never ever leave a window open on July 4th (or any other day for that matter)  unless you are home and are certain, without any possible doubt, that  your dog would NEVER attempt jumping out of it.

4.  Sometimes a "thunder shirt" can be comforting to a dog because it  mimics being held close or being in a confined space where a dog will feel safer. you can read all about this product here. http://www.thundershirt.com

5.  Counter the frightening sound with a familiar, calming sound such as the TV, classical music or a sound machine that has a setting for white or pink noise.

6.  Behavioral Therapy at home.  This can turn a negative situation into a positive one. Basically when a dog hears a constant noise that scares him/her,  he gets a new toy or special treat (like rewarding your dog before and after taking a bath).  This can work in cases where the dog is mildly to moderately afraid, but is extremely difficult to apply when they are terrified as survival is their only thought and motive in extreme fear situations. 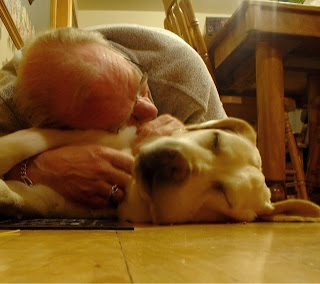 7.  Physically comfort them.  For years, behaviorists believed "comforting a dog only reinforced their fears".  Fortunately that theory has recently been debunked by leading canine behaviorists.  Just be aware to comfort with gentle and reassuring tones. be careful not to join in their fear or becoming impatient with them. Tone and body language are key here!  Be their gentle, loving, reassuring pack leader.

8.  There is a homeopathic remedy called "Rescue Remedy" that can help calm a nervous dog.  You can get it from Whole Foods, any Natural Pet Store or online.  It's all natural and has no side effects.  You can add it to the water or squirt it directly in their mouth.  We have had first hand experiience with this, and have found it can be helpful.  Benadryl and dramamine (drowsy formula)  can also help. We are not saying drug your dog, but if your dog is that fearful of this loud holiday, an occasional "sleepy cocktail" won't hurt them a bit. It's akin to a human taking a drink to calm their nerves. 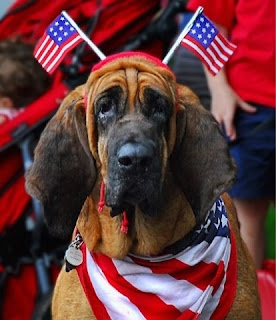 As this extraordinary country of ours turns one year older, we are not trying to discourage anyone from partaking in and enjoying all the fun and frivolity that goes along with it.  With awareness and the right  preparation, you and your dog can enjoy a healthy and happy Fourth of July!